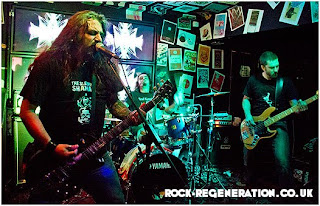 
UK-based dirty rock n' roll trio GRIFTER are putting the finishing touches on the follow up to their self-titled debut full-length, which was released in 2011 by Ripple Music.

Promising to deliver an album full of material that has been described as "heavy as fuck," guitarist/vocalist Ollie Stygall made the following statement about the band's forthcoming record:


"We're tantalisingly close to finishing writing for the album. One new track 'It's Not Me, It's You' just needs a few tweaks to round off some of the rougher edges but it's sounding tasty...it has kind of a swing blues vibe to it, albeit much heavier. We're also looking at dusting off "Woman Of Mine" and making the definitive version of it. We've always loved the song but it could do with a spruce up...I have some nice ideas. Once that's done we just need to think about getting in and recording it!!!"

More news on this release as it comes. In the meantime, GRIFTER's self-titled debut, which Planet Fuzz called "the perfect soundtrack to a night of debauchery," is currently available via Ripple Music. Head over to www.ripple-music.com to order.

GRIFTER has recently been confirmed for this year's Hard Rock Hell, which runs from November 28th through December 1st in Pwllheli, Wales. Also confirmed so far are Black Star Riders (Thin Lizzy), Nazareth, Gentlemans Pistols, The Answer, Paul Dianno, Blaze Bayley, Lawnmower Deth, Chrome Molly and Crucified Barbara with many more to be announced. For updates, tickets and information visit www.hardrockhell.com.
For all things GRIFTER, visit the following links: