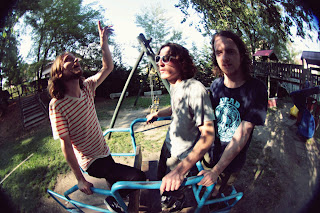 Instrumental space rockers “Radar men from the Moon” are going to hold a live stream studio session to showcase their latest release “Echo forever”. The live stream is going to be held on Wednesday December 12th at 21.00h, UTC+1.(22.00h,Greece)

On the 12th of December fans and curious people can join a studio session through an online live stream. The live stream will be held at Flipside art space in Eindhoven and shall be host by CityTV.
http://radarmenfromthemoon.nl/
http://www.livestream.com/citytvnl

The band is momentarily focusing on playing international shows. However, because they are still students, they don’t have the resources to set up a big tour and go to every corner of Europe. The live stream offers the opportunity for fans to attend a session with the band in an online environment.

Radar men from the moon is a three-piece instrumental rock band from Eindhoven (NL), with Glenn Peeters on guitar and sonic attack, Jan-Titus Verkuijlen on bass and shivers, and Tony Lathouwers on drums and audio generator. They write, create and perform experimental sounds that will take you on a trip far away into the unknown boundries of space and time. They are working hard to get one-off shows and mini-tours in Europe since they released their full length album “Echo forever” in September. Over the past year they played in England, Italy, Germany, Belgium and France. Greece and Slovenia are currently on their radar.