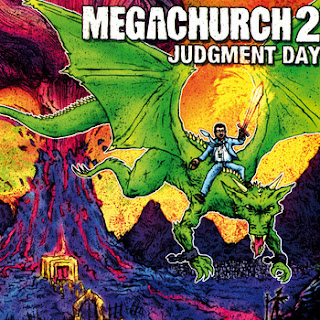 Megachurch
Melding metallic shards of Burton-era Metallica, Mastodon, and Queens of the Stone Age to the mathematical rhythms of Battles and Slint, Megachurch save the soul of metal from the venial sins of guitars and vocals through their trademark twin bass guitar and drums attack. Hewn from the same leaden timbres that anchored their promising self-titled 2010 debut, Judgment Day cuts across genre and practice, pitting pietism against irreverence or the glory of unfettered riffage.

The chemistry gained by Megachurch from two years of high-profile Ohio shows is on full display. Bassists Brian Michael Hill and Mikey Baranick perform in the seasoned lockstep, with Hill’s iterative basslines threading through Baranick’s buzzsaw riffs. Drummer Dan Price, having previously bonded with Hill and Baranick in their respective poppier endeavors This is Exploding and Machine Go Boom, is no exception. Manning the engine-room of the operation, Price’s pattern drumming harnesses the kinetic power of fluid tempos and irregular time-signatures while opting against the metal staples of blast and d-beats. Found-sound samples of politicians, televangelists, and Tea Party fanatics stand in as the group’s manic vocalists.

Racing through eight songs in just over 27 minutes, Megachurch utilize as much restraint as creativity, stripping away all extraneous elements to reveal lean, muscular songs. John Delzoppo’s recording and Price’s mix pay these number the complement of warm, clear production.

Stressed Sumo Records, based in Derby UK and formed in 2007, is run by Neil Cooper (Therapy?) and Phil Rhodes.